As a developer you’ll often need to place an assembly into the GAC (Global Assemblie Cache).
There are several ways to do this. You can do it in command line with “gacutil -if ‘assembly path'” or by dragging your assembly in explorer to “C:Windowsassembly”.

Well there is another even easier way to do this. By just adding a registry key, you can place an assembly into the GAC with a simple right-click, as you can see below. 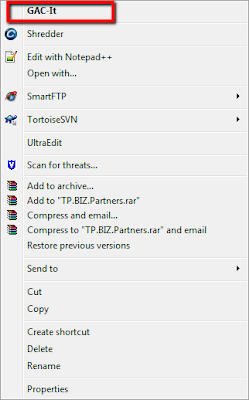 You can also change the shown text when you right-click by changing the ‘GAC-It’ (written in red) to the desired text.

ATTENTION: the path to the gacutil.exe may be different on your pc. I’ve installed it on a 64-bit machine. you should verify the actual path of your gacutil.exe (may occur multiple times on your pc).